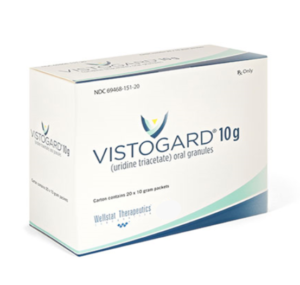 Vistogard is made available in the EU and Australia through a Named Patient Program, enabling HCPs to access this medicine for patients who have an unmet clinical need.

Vistogard is an orally administered pyrimidine analog which is the first and only antidote approved to treat 5-FU or capecitabine toxicity. This medicine may be given before overdose symptoms appear. However, treatment with Vistogard must begin within 96 hours after you last received capecitabine or fluorouracil.

What is Vistogard approved for?

Vistogard is indicated for the emergency treatment of adult and pediatric patients:

5-FU is a chemotherapy medication which has been used for decades in combination with other chemotherapy agents and/or radiation to treat various solid tumors, including those of the colon, pancreas, stomach, esophagus, breast, and head and neck. The drug is most commonly administered by infusion pump at or near what is considered the maximum tolerated dose. Overexposure to 5-FU can lead to severe myelosuppression, gastrointestinal hemorrhage, septic shock, multiple organ failure, cardiac and neurological complications, and death. Because 5-FU is administered in different doses and schedules, patients can experience dramatically different patterns of toxicity.

Capecitabine, sold under the brand name Xeloda among others, is a chemotherapy medication used to treat breast cancer, gastric cancer and colorectal cancer. The drug comes as a tablet and is administered orally. The amount of capecitabine administered varies depending many factors, including height and weight, general health or other health problems, and the type of cancer or condition being treated. Like with 5-FU, patients can experience dramatically different patterns of toxicity.

Vistogard was granted marketing authorization by the FDA in December 2017, after the agency determined that the product exhibits a favorable benefit:risk profile.